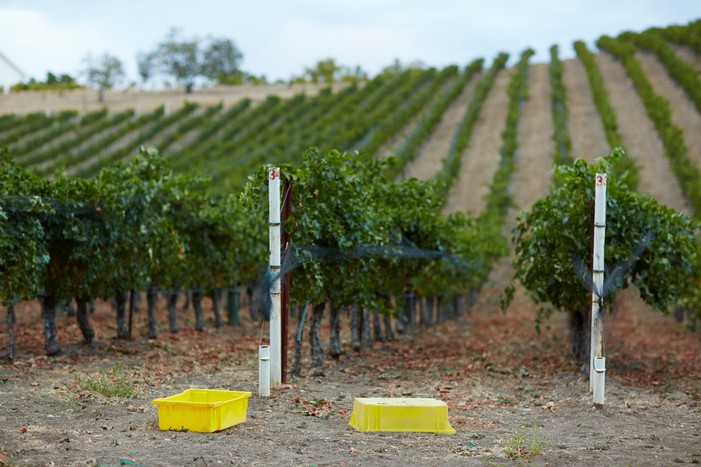 Grapevines require a certain amount of heat to make grapes and a certain amount of sunlight to make sugar, and an excess of either degrades the potential quality. From 2012 through 2016, California experienced a number of climatic events—most notably consecutive years of drought and warming temperatures-that have prompted us to reconsider how we farm for high quality wine. One solution that we’ve come up with is the use of shadecloth to lower the temperature around the grape clusters and to decrease the potential for sunburn.

Shadecloth is simply a knitted fabric that blocks UVA and UVB light from penetrating the canopy while allowing a sufficient amount of photosynthetically active radiation (PAR) to reach the leaf’s chlorophyll and other pigments. PAR, in short, is the light in the visible spectrum (400-700nm wavelength) that’s responsible for photosynthesis.

We began experimenting with black and green shadecloth in 2013 and since then we’ve covered over 90% of our vines. So far, the results are very promising. We’ve been able to harvest grapes later than we’d expected given the increasingly early budbreak with greater color, less sugar (lower potential alcohol) and far less desiccation. This year, with the cooperation of Cal Poly San Luis Obispo, we’re going to experiment with a white shadecloth to see if color makes a difference—how white or black shadecloth influences wine grape composition. Stay tuned.